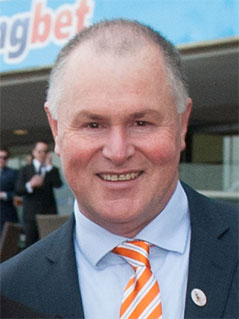 The directors of the Australian Jockeys Association are pleased to announce the appointment of Mr Des O’Keeffe to the position of Chairman of the AJA from 1 January 2017.

Mr O’Keeffe will take over from Mr Ross Inglis, who has held the position for 14 years.

The Chief Executive of the AJA, Mr Paul Innes, stated: “Ross Inglis has made an invaluable contribution to the welfare and conditions for Australian jockeys, and on behalf of the Board I wish to express my deep appreciation for his guidance and counsel since the establishment of the AJA in 2002.”

In appointing Des O’Keeffe, the Board acknowledged his dedication and tireless work for jockeys, not only in his home state of Victoria, but across all racing jurisdictions in Australia.

As part of the changes to its Constitution, the Board of the AJA also announced the appointment of lawyer Mr Bob Whyburn to the position of Assistant Chief Executive to take effect immediately. Paul Innes said “Bob has been a director of the AJA for 9 years and he will bring commercial and corporate skills that will enhance the Board’s leadership and corporate governance”.